What is Star Boys?

Jack is a varsity athlete with a knack for Shakespeare. Wally is an alien prince pursued across the multiverse by his father’s bounty hunters. They both love to sing. They’re both in deadly peril.

And they’re a runaway primetime success. Nico Martin, in his first Hollywood role, has never been happier than on the set of a high school musical alien drama. He loves playing Jack, his new castmates are a trip, and glossy, superficial LA is the perfect place to hide from the mess and heartache of a breakup with his Brooklyn hipster boyfriend. The perfect distraction is his costar, Matthew Rose: Hollywood prince, locus of media obsession, and Nico’s new friend-with-benefits. He’s talented (that Emmy!), charming (that wit!), and was voted Sexiest Man In America two years running (those abs!). He also makes amazing pancakes, is embarrassingly devoted to his cat, and is all around weird enough for Nico to fall in love with. He says the abs were mostly contouring.

But Matt doesn’t want anything serious. Matt’s in the closet. Matt’s depressed and self-destructive and trolls fandom message boards at three in the morning.

And it gets worse. Jack Johnson only does battle with alien invaders, while Nico has to fend off pushy fans and a pushier paparazzi. Jack’s risked his life to save Wally from tentacled monsters and his sun-snuffing space emperor father, but more dangerous by far is Matt’s real dad. Harrison Rose is the agent who makes stars and breaks them and he’s not about to let Nico share Matt’s spotlight, never mind his life.

Nico can have stardom and the show he adores, or he can have the man he loves. Or he can dig his heels in, find his inner primadonna, and try to take this town for everything it’s got.

What are people saying about Star Boys?

“Crisp pacing and clean, distinctive characterization. …I’m in love with every single character.”

“Much like Nico and Matt, I fell hard and I fell fast and after a few chapters I was incredibly invested in and attached to them and Katya. Because it’s a story about Hollywood and its repercussions on the personal level, I feel like it would have been incredibly easy to lose focus and get caught up in side-plots that explored all the (rotten) aspects of its industry, rendering the novel either hollow and glitzy, or excessively melodramatic. But while [Stannard] offered the reader glimpses into those cavities, [they] never strayed from the story [they] actually wanted to tell, and that is testament to [their] skill.”

“I continued to be delighted by just how good [Stannard is] at navigating through several layers, even on a meta-level.”

“A lovely story with a lot of heart.”

Star Boys is is on submission to publishers.

Excerpts and side stories will be posted under the Star Boys short fiction tag. 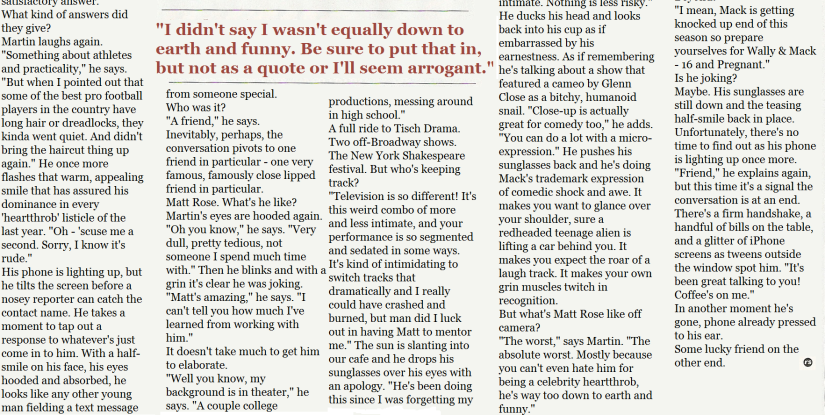