This is an amazing game for people who don’t play many games (I know because I am one of them) – and it’s one where watching an LP can’t really replicate the experience of piecing the story together for yourself. If you love The Terror and internet speculation on the cascading mistakes that led to the Franklin Expedition’s awful fate then buddy, have I got a game for you .

END_OF_DOCUMENT_TOKEN_TO_BE_REPLACED

We watched Hellier for research purposes while sequestered at Emily Tesh’s writing retreat and it certainly was a show that we watched.

END_OF_DOCUMENT_TOKEN_TO_BE_REPLACED

The past month has been a ride, my friends. Let’s take stock.

August 14: We reunited in London and met six to twelve pigeons and a cat. We also ate our way through the Borrough Market, saw Gwendoline Christie at the Bridge Theatre, and went swimming on Hampstead Heath. 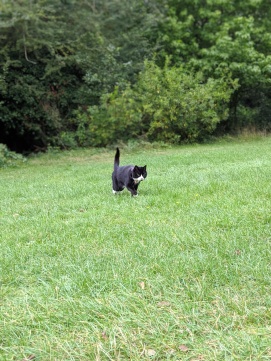 August 16: We went to Dublin WorldCon. We mingled! We malingered! One of us developed a month-long cough! Read all about it. END_OF_DOCUMENT_TOKEN_TO_BE_REPLACED

Dublin WorldCon was our first outing as professional literary type people, which means careful conduct i.e., giving business cards to friends who already knew our contact details and skipping the Hugo awards to watch season 2 of Derry Girls in our Airbnb. It was also the first time either of us had been to a con, which is probably appropriate since WorldCon splits the difference between the two.

END_OF_DOCUMENT_TOKEN_TO_BE_REPLACED

No, this will not be about ‘the little death.’ Though actually, that’s not a bad way to describe it.

I feel like every writer has reached that point where they would give anything to be done with a certain project/draft/manuscript. The finish line is the goal! Having that final word count! Crossing off that final to do! Sending it off to betas or agents or publishers, or even just hitting post. It’s someone else’s problem now, baby.

But what comes after that? Naturally there’s the relief, the celebration, the smugness, the need to tweet gloatingly about it, but there’s also a special kind of emptiness that comes with it.

END_OF_DOCUMENT_TOKEN_TO_BE_REPLACED

Rewriting is always an exercise in humility. It is also an exercise in wondering just what the hell past you was thinking, and often the answer is simple enough.

END_OF_DOCUMENT_TOKEN_TO_BE_REPLACED

In honor of father’s day, an update! And, more importantly, a new story.

With The Fairy Dealer off with our agency, we’ve turned out attention to revisions of our very first manuscript together. Star Boys was our first original project and our first love – and we realized, after a year without peeking at it, that a first love can be…sloppy. Still beautiful! Still lovable! But worth some fixing up.

As we hack and slash our way through Star Boys: Redux, frankly loving the rewrite process as we get the chance to revisit characters we know better than ever, we wanted to keep up the cadence of sharing short stories on here.

What better way to celebrate father’s day than with the tale of one of our hero’s magical upbringing? Magical is one way of putting it, anyway.

END_OF_DOCUMENT_TOKEN_TO_BE_REPLACED

We’re trying to get into a better cadence of posting on here, and the good news is that, since we’re categorically unable to resist writing short stories for our own universe, we have no shortage of material.

This week, we’re celebrating the submission of our final manuscript to the agency by posting the story of the origins of Weed Brownie – the favorite pun and chief descriptor of our main character, as well as what we called this work for way too long.

END_OF_DOCUMENT_TOKEN_TO_BE_REPLACED

Has it been a while, or is it just us?

Going by the date on our last post, it ain’t just us. We promise we haven’t been slacking! Since the new year (happy new year, five months late), we have been able to reunite twice – no mean feat when you live on opposite sides of the ocean, give or take half a continent.

END_OF_DOCUMENT_TOKEN_TO_BE_REPLACED

Fairies are finicky creatures, and so we must not expect a lot from them and we must be patient in our search for them

It had been almost two weeks and Wes wasn’t worrying. He was much too busy with papers and rotation and shopping and food prep, which took up way more time than he considered reasonable. But Pidge would want him to eat properly, even if he wasn’t there to bully Wes into it.

Leaving the window open with a glass of oat milk on the sill hadn’t lured Pidge back, and nor had the pile of glitter or the Claire’s plastic bracelet he’d got out of the hospital’s lost and found. His WhatsApp messages were left unread too and no birds had tapped on the window to tell him, in Pidge’s voice, that the Alaskan Thunder Fuck was budding and he’d be right over when the harvesting was done. Wes knew, because Jessica kept repeating it, that this was to be expected, it came with the territory of dating a supernatural creature, or a guy who was almost thirty and sold weed out of a derelict warehouse. Wes worried anyway though because maybe another of Pidge’s siblings had hurt him, or maybe he’d gotten bored of playing house with a mortal, or maybe he’d just gotten bored of Wes.